How to Deal with Impaired Driving Charges in Ontario

If you are found guilty of impaired driving, you will face harsh repercussions such as losing your license, paying large fines, accumulating demerit points on your license, and perhaps facing jail time. If you are charged with impaired driving, it is critical that you consult with a lawyer to give yourself the greatest opportunity of avoiding these consequences. Here's everything you need to know about defending yourself against drunk driving allegations in Ontario.

What Are Impaired Driving Charges?

Impaired driving charges in Canada are criminal penalties that arise when you are caught driving while under the influence of alcohol or drugs. In Canada, impaired driving is defined as operating a motor vehicle with more than 80 milligrams of alcohol per 100 millilitres of blood in your system. If you are charged with impaired driving, it can result in one of three outcomes: a summary conviction, an indictable crime under the Criminal Code, or an offense under the Ontario Highway Traffic Act (HTA). For example, if you are convicted of impaired driving as a summary offense, you might face up to two years in prison and a $5,000 fine. Penalties for an indictable offense, on the other hand, can be significantly more severe, including imprisonment for up to ten years and a minimum fine of $1,000. If you are convicted of a summary or indictable offense, you will have a criminal record. If you are charged with an HTA violation, your license will be suspended immediately but you will not have a criminal record.

What Do Police Look For When They Pull Me Over And Suspect That I'm Impaired While Driving?

There is no foolproof strategy to avoid an intoxicated driving prosecution. Regardless of how you drive, there's always the possibility that a police officer would pull you over and suspect you of driving while drunk. However, understanding what police look for when they encounter someone behind the wheel who appears to be intoxicated might help you avoid these accusations. For example, weaving between lanes or swerving across numerous lanes at once is a red flag that an officer will look for. This implies that you are not paying attention to your surroundings, and it may also suggest that you have drunk alcohol before driving. If a police officer suspects you of being intoxicated while driving, he or she will request that you take field sobriety tests (FSTs). These tests are intended to determine whether or not a motorist is impaired by drugs or alcohol.

Can My License Be Taken Away From Me if I Am Found Guilty of an Impaired Charge?

Yes, your license can be taken away. If you are found guilty of a criminal impaired driving charge, your license can be taken away from you as part of your sentence. The length of time that it is taken away depends on if it’s a first offense or a repeat offense. If it’s a first offense, you may lose your license for at least one year. If it’s a repeat offense, you could lose your license for at least three years. A third conviction within 10 years may lead to a lifetime license suspension. Additionally, there are other penalties that come along with being convicted of impaired driving charges. For example, there may be fines associated with these charges—the amount varies depending on how severe your case is—and you could also face jail time. Jail sentences range from zero days to 10 years depending on how serious your case is. Lastly, if your blood alcohol concentration is particularly high, you will face more severe penalties.

Where Can I Get More Information About Impairment And Other Drug-Related Laws In Ontario?

If you've been charged with impaired driving, it's a good idea to become acquainted with the many components of impairment and other drug-related regulations in Ontario, since they will be directly applicable to your case. Begin by reviewing Section 320.14(1) of Canada's Criminal Code, which defines impaired driving offenses. It also details the consequences if you are guilty of driving while intoxicated. Section 320.17 discusses how police define and test for various forms of impairment. Then, check into impaired driving charges in Ontario in particular. Check out impaired driving charges under Ontario's Highway Traffic Act, for example (HTA). While these charges differ from those under the Criminal Code of Canada, they might nonetheless have an influence on your case. If you are charged with a violation of the HTA, your license may be suspended, but you will not risk jail time. If you are charged under the Criminal Code, however, you will risk fines and jail time. You should also read the Ontario Guide for Defendants in Provincial Offenses Cases, which offers a wealth of useful information that will assist you in determining the best course of action to take when defending yourself in court.

Why Do I Have To Go To Court?

Impaired driving charges (driving while under the influence of drugs or alcohol) can have serious implications in Canada. If you are accused with impaired driving, the prosecution has concluded that you have a good chance of being convicted. As a result, you must appear in court on the day your charges are due to be heard.

Is There Anything I Can Do To Avoid Going To Court?

Appearing to court is something that no one likes to do, so if you find yourself facing impaired driving accusations, chances are you're searching for any way to avoid going. If you engage a lawyer to handle your case, your lawyer will be able to appear in court on your behalf. If you do not want to go through a trial, there are numerous options for resolving your case. You might reach an agreement with the prosecution to take an impaired driving course or perform community service instead, both of which could result in your charges being dropped. If everything else fails, there's always the option of admitting guilty and requesting mercy from the court during sentencing (though we don't advocate doing so unless absolutely necessary, and make sure you consult with a lawyer before pleading guilty!).

What Happens If I Don't Show Up In Court?

If you fail to appear for your impaired driving trial, a warrant for your arrest may be issued. Whether you decide to defend your charges or not, it's critical that you notify your lawyer if there's any reason you won't be able to attend court on a specific day. It's also worth mentioning that if you're convicted of impaired driving, you'll almost certainly have a criminal record. This may have an influence on anything from job chances to travel and visa status.

Should I Hire a Lawyer? 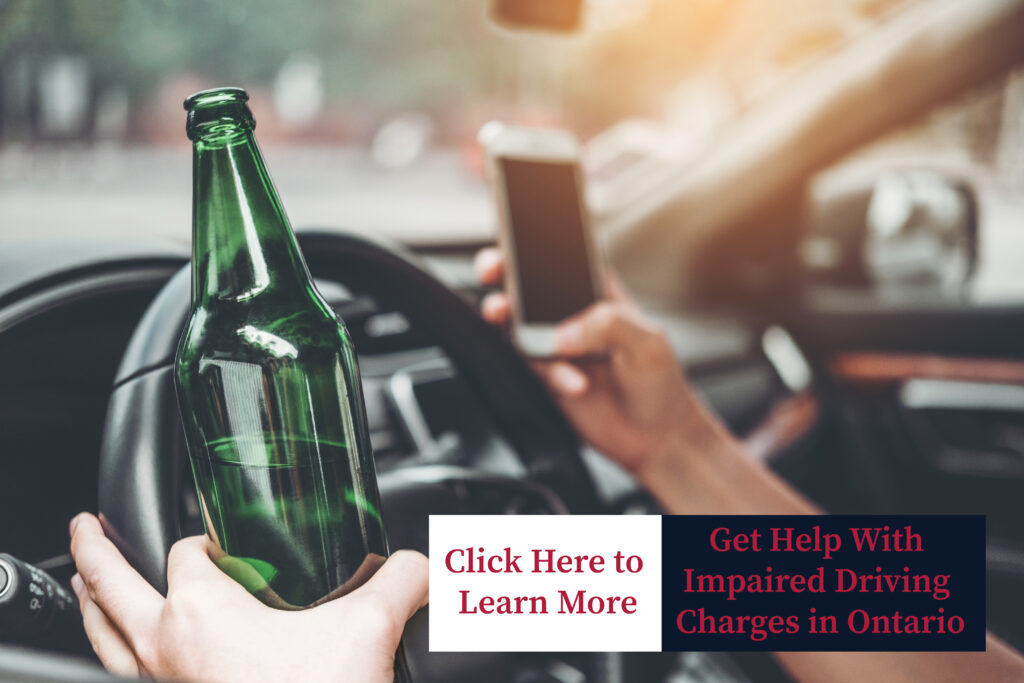 Every impaired driving case is unique, and the best way to prevent a criminal record is to consult a lawyer as soon as possible. Finding an attorney with knowledge in your specific circumstance and who can assist you in getting back on track following your impaired driving accusation does not have to be tough. How do you go about obtaining a lawyer like this? Inquire with friends and relatives to see if they know anyone. Post on social media or call local law firms to see if they have worked with clients in similar situations to yours. You might even want to check internet reviews and ratings for individual lawyers to see what other people think of them! Whatever method you choose to find a lawyer, be sure to select one who can instantly link you with a good criminal defense lawyer in Toronto. After all, when facing an impaired driving accusation, time is of importance!

The post How to Deal with Impaired Driving Charges in Ontario appeared first on https://soonrs.com

The post How to Deal with Impaired Driving Charges in Ontario appeared first on https://wookicentral.com

The post How to Deal with Impaired Driving Charges in Ontario appeared first on https://gqcentral.co.uk